When designing for an IC that uses the PCB as a heat sink, the datasheet usually only gives a single layout example – if that. But, what if you can’t implement your design exactly like the example? What are the relative effects of various compromises? It turns out that my intuition for which factors were most important was quite wrong.

I was reading an excellent application note from Texas Instruments, “AN-2020 Thermal Design By Insight, Not Hindsight” which lead me to do the detailed analysis I present here.

The Basics
There are many good explanations of heat 􀂠ow calculation available; so, I won’t go into much detail on the basics. I include some of the basics here, only for context. Most IC data sheets list a maximum junction temperature. How do you know what the junction temperature is in your application? You can’t measure it directly. [Actually, some IC’s have an on board temperature sensor for this purpose – but, I digress…]

If you are familiar with Ohm’s law for electrical circuits there is a very useful analogy to be made with thermal calculations. In this analogy, you can think of heat flow (power dissipation) as an electrical current. Temperature is the same as voltage; heat flows from high temperature areas to lower temperature areas. And electrical resistance exactly corresponds to something called thermal resistance. Everything in the path of the heat flow presents some quantity of resistance to that flow. Thermal resistance is usually represented with the Greek letter theta (θ) and is given in the units “degrees C / Watt” (°C/W). This works just as it sounds, there will be θ degrees of temperature drop across the resistance for every watt dissipated through the resistance.

Some Insights Into SMD and PCB Heat Sinks
It is difficult to make a meaningful comparison between the relative effects of horizontal and vertical thermal resistances on a PCB. See the section at the end of this article for details on how I chose to do it.

For a very small board the θsa dominates the total θ. As the PCB gets bigger the total θsa gets smaller, so that θcu begins to dominate. At the size where θsa is smaller than θcu, the benefits of a larger PCB begin to vanish. Thicker copper or adjacent plane layers will decrease θcu and allow more PCB area to be effective. The thickness of the copper or number of plane layers is only important if the PCB area is large enough that θcu ≈ θsa. If the PCB is less than 10 cm², a single layer of 1 oz copper is nearly as good as thicker copper. Per the TI app note: At 60 cm², 2 oz copper can yield a 25% improvement over 1 oz copper. My calculations put it at about 28%.

It is interesting to note that the thermal resistance through the thickness of the FR-4 material is an order of magnitude less than that of the PCB to air. For 1 cm², 70 °C/W for 63 mils of FR4 vs. 1000 °C/W for the PCB to air. This means that even if you only have copper on one side of the PCB, the other side will dissipate almost as much heat into the air. And an interior layer with a direct metal connection will be almost as effective as a surface layer.

This is the LibreOffice spreadsheet I used to calculate these graphs.
[link to spreadsheet] 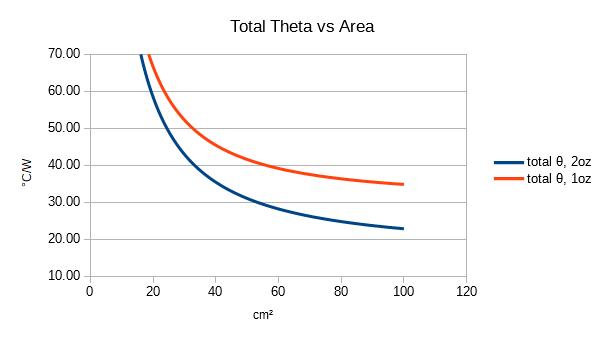 Relative Improvement of 2oz Over 1oz